Doubt there’ll ever be a v2 of this one, but there’s a certain levity to finding little bits of personality on the trail when you are working hard.

Its like the trail itself is smiling on you, right before the next climb.  You pretty much gotta smile; even if you walk for a living, compared to most everyone else, you are still on vacation.

I’m not sure what a DEhA is, but it made me cackle like a hatter when I found it. Maybe there’s something in ME’s aquifers. The humor might not translate well to text from my head.

Whoever wrote this was at exactly the same point in their arc on the AT as I was when I passed it. In retrospect it had a lot worse to get, and whatever I was complaining about at the time would probably be a joke to me now. 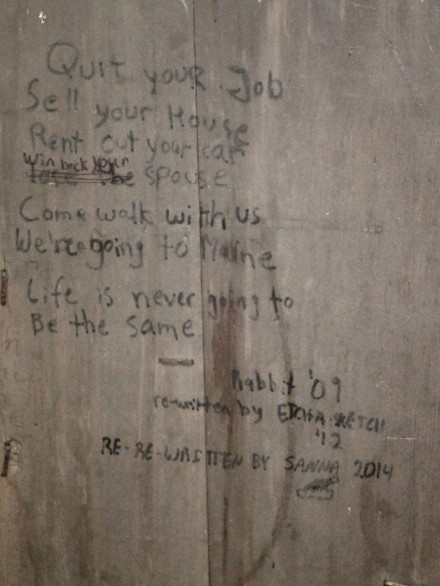 There were plenty of little bits of crank-poetry along the trail, many of which describe some of the trail personalities to a T. This one scratched my funny bone at the time and got saved, many others were lost to my camera.