The first of the road-walks between the AT and the NCT was mostly uneventful, I set myself up to cross NH in a day (up at the skinny point) and it worked pretty well. I even got a sort of pseudo homestay just inside VT, a guy I met at a pizza place pointed me to his cabin and I hitched out to it from near the NH/VT border. Got a little lost and tried to hitch to somewhere I knew where was, and got even more lost. (I wasn’t carrying very good maps for this bit, and no tablet or GPS enabled device yet either) then got righted by some college age kids. (maybe younger?) Even with that misadventure though I put down the road mileage pretty fast. 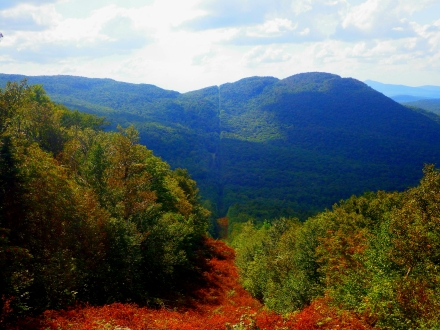 From the LT’s northern terminus, you can see this ten-foot wide swath cut into the woods as the only thing separating the Canada from the US, there are some pylons noting the Treaty of Washington, which without googling, I would guess is the document that formally specifies the border’s location geographically, maybe some other stuff too. Heading south, the LT is about as tough as anything the AT had to offer, save the notches. I was lucky in that I saw little rainfall, which drastically helped the mud situation, even so there were a few deep mud pits. (I was able to stick a trekking pole down to my wrist, and I didn’t try for much farther…) Overall however only one day dropped me below 20 miles per day, and that was because I happened upon a mountaintop wedding, and decided to stick around and watch,which then turned into cowboy camping on the deck of a ski chalet. In a bit of a moment where worlds collide, the wedding was for a friend of a friend of Dosu Kinuta, an AT thru-hiker I had brushed elbows with. (My parents gave him trail magic while they were slack packing me.) I got his contact info and was told he was gonna finish the LT NoBo starting in a week or so. We missed one another, (and pretty narrowly I think) as he was getting back on really close to when I was getting off.

Overall the LT was really pleasant, a nice change of pace from the relative hustle and bustle of the AT, I had a lot of nice simple interactions with folks on trail. Even got a homestay from a couple, Root and Woven, who were almost done with their NoBo and happened to live on a homestead really close to my route, and at a really convenient midway point, enabling me to make it between the LT and NCT without any  stealth camping, which is a plus. Most nights on the LT had a few people around, there were some college outdoor clubs out in force, and my last night I got to spend some campfire time with a few people, including two musical vagabonds, and someone involved in the administration of the LT. Which lent an additional positive light to my memories of VT, and maybe elevated it to my favorite of the eastern states. On my little bit of road-walk between the LT and NCT I also ran into Transplant’s father, whom I had briefly met on Katahdin, I had to decline his offer of a ride, but he gave me some advice on where to find food in Middlebury. I also ate many Maple Creemees on the way, and was able to make Crown Point without too much trouble, though I did have to hurry a bit going forwards.