Jetting thru WI’s 200 miles in 6 days neither left room for error, nor was a section prone to it, with a gentle elevation profile and overall easy to follow tread. Its greatest challenges came in the mundane challenge of mustering quickly in the morning and bedding down quickly at night. Such sections aren’t the most interesting to recall as a narrative, but are often wonderful in the moments; a simple pleasure, wherein talents learned in previous hardship aren’t tested, but exercised. Hiking the North woods in the spring, preseason to the more crowded summer offers cushier conditions than I think most expect. Cool, but not bitter cold temps, combined with longer daylight hours, keep you up and moving in the day and resting easily at night. The bugs that swarm from the upper Midwest’s many waterways aren’t out yet in any significant force. The woods are most often empty of people, as schools are still in session and vacation season is a ways off; and aside from turkey, hunting seasons are closed. Autumn is still my favorite time to be outside, but trading the foliage for more daylight, and less consideration for being downrange of hunters doesn’t seem unfair at all.

None of that is to say that my way through WI was wholly unremarkable, I trudged long into the night to find shelters that were perhaps overly ambitious targets. Once of which was a small hardly optimally shaped building with a door, and made up my first night in the state. The next, and last was more a standard Adirondack style shelter, but with columns closely spaced instead of wall near the open end, as an architectural flourish to an otherwise simple building. Or finding myself sleeping beside a stream underneath a low clearance bridge, having left the day unplanned and ending with miles of road before the next bit of trail, without knowing if camping is even permitted near that trail head. Or getting mixed results hoping for shortcuts by following jeep trails. 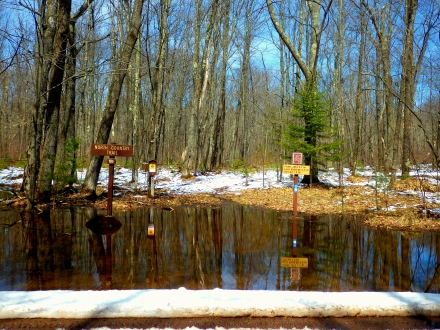 Spring thaw was in full effect as I tromped thru WI, as the contrast between these pictures show. I’m sure I would’ve encountered more places where the trail becomes a pond, had off trail section of WI been weighted more towards the end, but as it was I found myself practically snowshoeing into the state and wading out into Jay Cooke. Where I got spirited away by my friend Lars, first back to his cabin, and then back home to the Cities to have myself a bit of a spring break. I seem to diverge from hiking quarterly, and then inevitably get delayed in getting back to trail, as I  often put myself at the mercy of whatever cheap or free transport I can find. (Friends and Family have been super helpful on this front, although I suspect some foul play has perhaps been involved in some of my delays.)